“Prejudice is a raft onto which the shipwrecked mind clambers and paddles to safety.”

Ben Hecht left the University of Wisconsin for Chicago in 1910 and became a newspaper reporter. His reporting trained him to capture a story, and how to observe what was happening in the world.

In his early career as a reporter and a partner in the Grady Rutledge publicity firm, Hecht played a major role in organizing campaigns against the Ku Klux Klan in the early 1920s.

By the beginning of World War II, however, Hecht was already a successful reporter and Hollywood screenwriter. Before 1939 he had already put his pen to such works as Underworld, A Star is Born, Scarface, Viva Villa, Scoundrel, and Wuthering Heights, and been nominated for three Academy Awards (soon to be four, with Wuthering Heights). He was a well-known entity when he joined 130 other luminaries in signing a 1941 appeal for full support to allies in the war that was published in the New York Times. The letter called for the “utmost material assistance by our government to England, the Soviet Union, and China.” It also called for an end to religious and racial discrimination in the United States. “There can be no victory over Hitlerism abroad if democracy is destroyed at home.”

This was only the beginning of Ben Hecht’s work in activism on the part of the Jewish people worldwide. In April, 1941 he devoted his column in the PM magazine to criticizing the leadership of American Jewry. Hecht described how he “deplored the fact that America’s important social, political, and literary Jews were reluctant to speak out as Jews under attack and preferred to conduct themselves as neutral Americans” in his autobiography, Child of the Century.

In response to this bold column, activist and politician Peter Bergson, also known as Hillel Kook, contacted Hecht to join him and others who had arrived from Palestine to New York City to drum up action to save the Jews of Europe. Hecht admitted he met with Bergson because “of my having turned into a Jew in 1939. .. In that year I became a Jew and looked on the world with Jewish eyes. The German mass murder of the Jews, had brought my Jewishness to the surface…I was too old to enlist in the battle in Europe. But I was not too old for anger … The anger led me to join an organization for the first time in my life. It was called “Fight for Freedom” and was dedicated to bringing the USA into the war against the Germans.”

Hecht enthusiastically joined with Bergson to do all he could to save the Jews still under Hitler’s thumb across the Atlantic. In 1943 Hecht wrote an article for Reader’s Digest titled, Remember Us, where he spoke of the need for a Jewish homeland. “For no homeland is ever theirs, no matter how long they live in it, how well they serve it, or how many of its songs they learn to sing.”

Hecht took his new commitment to activism to the stage that same year, when he wrote We Will Never Die, a pageant performed for 40,000 people at Madison Square Garden before going on to other cities, including Los Angeles. The performance was produced by Billy Rose and Ernst Lubitsch, with music composed by Kurt Weill and staged by Moss Hart. Hecht was moved to produce the work after learning of the two millions Jewish deaths in Europe, and partnered with Bergson and his “Committee for the Jewish Army” to bring the show to fruition.

The pageant had a cast of almost 1,000, and included Yiddish actor Jacob Ben-Ami, twenty rabbis who had escaped from Europe, and stars such as actor Paul Muni. The program included the singing of the shema, skits showing Jews risking their lives in the war, and actors portraying Jewish ghosts, describing their deaths. The pageant ended with a recitation of the kaddish, the Jewish prayer for the dead.

Directly following the end of World War II, Hecht wrote another piece for the theater focused on the plight of the world’s displaced Jewish population. The play, titled A Flag is Born, opened on Broadway in 1946, starring Paul Muni, Celia Adler, and a young Marlon Brando in one of his first Broadway roles. Peter Bergson’s organization the American League for a Free Palestine produced the show, which also raised money for the organization. The play advocated for the creation of a Jewish homeland in the post-war world. It even compared the Zionist dream to the American Revolution. The story follows Tevye, Zelda, and a young man named David, all Holocaust survivors, who are trying to move to Palestine. Only David survives the journey, encouraged by Jewish soldiers who ask him to join them in fighting for a place to call home.

After ten weeks on the New York stage, A Flag is Born was scheduled to move to the National Theater in Washington, D.C. However, the National Theater did not allow African Americans within its walls. An alternate venue was sought, and found, at the Maryland Theater in Baltimore. At the time the Maryland Theater only allowed African American patrons to sit in its balcony. Just hours before the show was to premiere in Baltimore the theater was informed that if they did not remove its discriminatory seating policy the NAACP would picket the performance. The demands were met, and a new seating policy recognized.

The proceeds from the play were used to purchase a ship that was renamed the SS Ben Hecht, which carried 900 Holocaust survivors to Palestine in March of 1947. The British stopped the ship and the passengers were sent to a Cyprus internment camp. Hecht openly criticized the British government and praised all who were fighting against them. Due to his outspokenness, all Hecht’s films were banned in Britain for a number of years, and his screenwriting career suffered.

Hecht used his prowess with words to speak out against the inequality, the murder of European Jewry, and mistreatment of people in his own country and across the world, both during the Holocaust and the establishment of Israel. 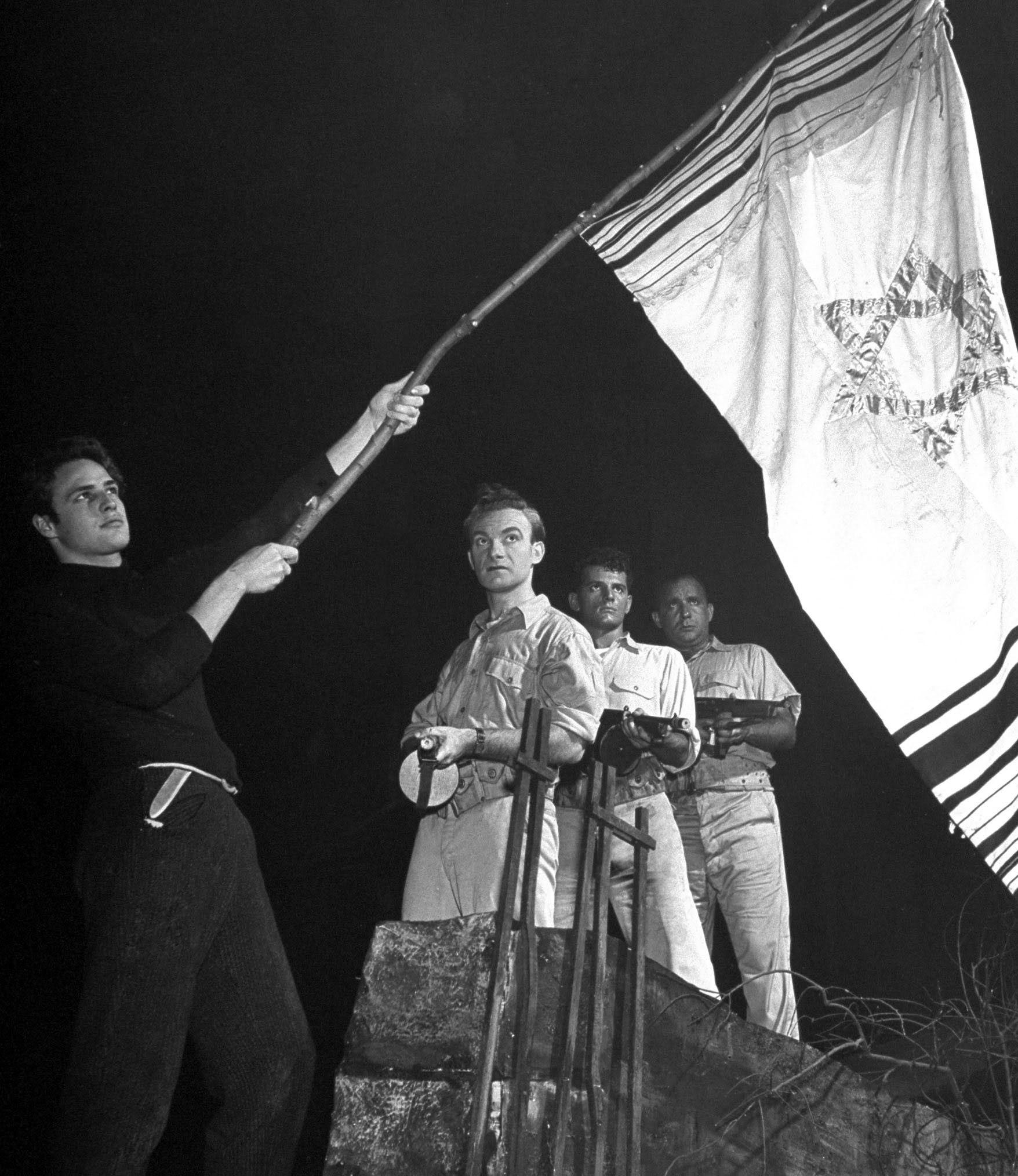 Marlon Brando in A Flag is Born 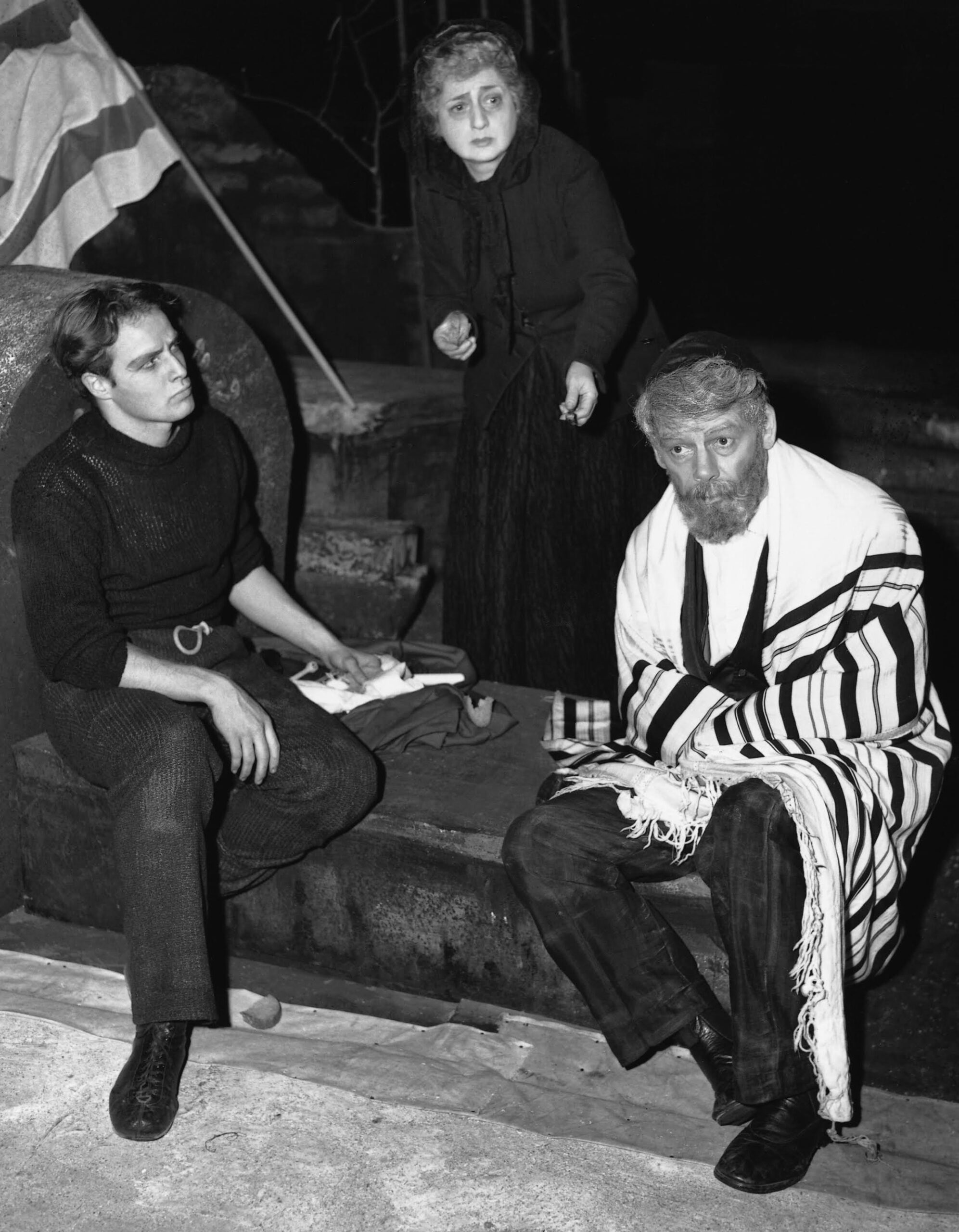 Marlon Brando and Paul Muni in A Flag is Born